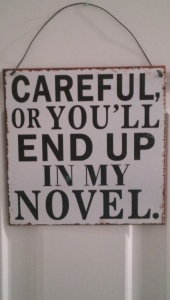 “Am I in it?” friends and colleagues have often asked of my Work In Progress.  Is it ever OK to use someone you know as a ‘fictional’ character in your novel or short story?  Some bestselling authors auction off their characters for charity: if you are the winning bidder then a character in their next novel is named after you, or you at least get a small ‘walk-on’ part. Marian Keyes and Jojo Moyes have both done this and it’s a great idea: who wouldn’t want to star in a top ten bestseller?

But what of us mere writing mortals?  Can we use real people without getting sued?  My WIP novel is set in the legal profession so I am going to have to be doubly – if not trebly – careful that nobody in my book bears the faintest of resemblance to anyone in real life!

My answer, though, is of course you can use real people for inspiration.   Observing people is one of my great passions in life.  How we interact, our relationships, the complicated dynamics of family and friendships, our character quirks, even office politics: people just fascinate me.  In another life I perhaps would have been a social worker or a psychologist; I even have the sociology degree gathering dust.  In fact, I spent years wanting to retrain as a prison psychiatrist.  The depths of evil in the human psyche amaze me, but that’s another blog post.

The trick is not to copy wholesale but to use snippets and observations from here and there, stitched together like Frankenstein’s monster to create the whole character.  Borrow a single character trait from a colleague by all means, but change their appearance, job, age and even sex.  The chances are most people won’t recognise themselves anyway but be extra vigilant that none of your fictional characters instantly bring to mind a real person – especially if the character is an evil one. When people ask if they’re in your novel or story, they always envision themselves as the romantic hero: nobody wants to appear as the vile mass murderer who skins puppies alive! Tempting as it is to take revenge on those I don’t like by casting them as the villain of the piece,  I try not to offend.

What about family?  Three years ago when I had a short story published featuring a woman at the end of her tether who stabs her evil mother-in-law to death, (Mother-in-law’s Revenge, Best, January 10 2012 issue) I had to hurry round to my in-laws to reassure them it wasn’t based on real life!  Luckily, my late mother-in-law had a great sense of humour (we joked about her not coming near me when I was wielding a potato peeler!) and I can state here with confidence she was nothing like Maggie.  Was Maggie, the mother-in-law character of my story, someone I actually knew?  No, she was a hybrid of several mother-in-laws about whom friends and colleagues lamented , with a dash of two women I once met thrown in.

For my novel which is based in the courtroom, I am thinking about little bits and pieces of the people I’ve met over the last 18 years. Like tiny glittering jewels, these characteristics will be strung on the necklace of my story to make what I hope is a dazzling whole.  Some of those I’ve encountered are wonderful, some are hideous, with just about everything in between.   Take judges, for instance. We all think of the stereotypical out-of-touch, dust and crabby old man in a wig, but in my experience many are charming, warm, friendly, compassionate and very switched on to the modern world. And maybe I’m getting older but a lot of judges are looking younger!

Another rich seam of material for characters is those who own, show or work with dogs.  Since becoming the owner of a rescue dog four years ago I have been plunged into a whole new world: groomers, vets, behaviourists, dogsitters, breeders and other dog owners.  I also volunteer at an animal shelter.  Although I maintain that dog lovers are the nicest people ever, and I have made some great friends, there are also some very unusual characters out there and it could definitely be the subject of a book!

Good luck with your characters and if you have a tricky mother-in-law, bite your tongue and stay away from the potato peeler!